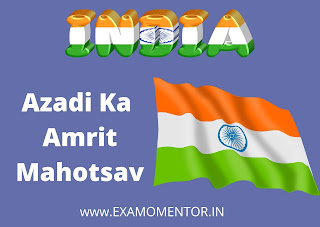 There are 5 main pillars of this initiative "Bharat Ki Azadi Ka Amrit Mahotsav."

The initiative "Bharat Ki Azadi Ka Amrit Mahotsav'' was announced on the 12th of March 2021 by the Prime Minister of India ( Narendra Modi).

This initiative will continue till the 75th anniversary of India's Independence  Day.

The idea behind starting this initiative (Azadi Ka Amrit Mahotsav) is to aware the young generation of the sacrifices of the freedom fighters and to pay tribute to them.

This initiative will make them realize the dreams of those legends who not only fought for Independence but also sacrificed their precious lives for the Independence of India.

The Mahotsav is dedicated to all those freedom fighters of India who have played a pivotal role in making India free from the Britishers. Another motive behind this campaign is to make India Self-reliant (Atmanirbhar Bharat).

In Azadi Ka Amrut Mahotsav, different types of events are being organized by the government of India to commemorate and celebrate the 75th Anniversary of India's Independence.

In this regard, the government of India has set up 259 members high-level committee, and the head of the committee is Prime Minister Narendra Modi, to celebrate 75 years of India's Independence.

There are countless unsung heroes or freedom fighters who have sacrificed their comforts and lives for the presence of Independent India.

The government of India wants to highlight such heroes and pay them tribute.

The campaign aims to increase the awareness and interest of young people in the development and progress of the country.

The Azadi Ka Amrut Mahotsav also wants to promote local business and manufacturing in the country. So that India will become self-reliant (Atmanirbhar Bharat) as soon as possible.

This campaign will highlight the different cultures of our country.

Unity in diversity is also one of the objectives of the Azadi Ka Amrit Mahotsav Campaign.

Thank You For Reading :

Essay on Places Related to Freedom Struggle Of India...

Essay on Amrita For Life...

Essay on Digital Collaboration in Classrooms...

A Better Tomorrow Essay in English...