Essay on Places Related To Freedom Struggle of India 650+ Words

So without wasting time, 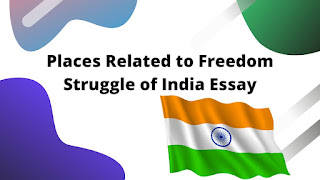 Jallianwala Bagh is a famous garden located in Amritsar, Punjab. It has a historic significance. It was one of the most important centers of the Freedom Struggle.
Jallianwala Bagh Massacre / Massacre of Amritsar took place on 13th April 1919. In this massacre, hundreds of innocents got killed & thousands injured.
According to eyewitnesses, more than 1600 rounds were fired on the innocent crowd in one go leading to more than 300 deaths.
Jallianwala Bagh Massacre proved a turning point in the history of India. It  left a permanent scar on Indo-British relations.

Chauri-Chaura is a village in Uttar Pradesh (Gorakhpur). This place also has a historic significance in the history of India. It became famous after the Chauri-Chaura Incident that took place on 4th Feb 1922 at Chauri-Chaura, Gorakhpur in Utter Pradesh.
On 4th Feb. 1922, the Non-Cooperation Movement participants clashed with the Police resulting in deaths of more than 23 policemen & civilians.
The Non-Cooperation Movement was launched by the father of the nation, ''Mahatma Gandhi."
The movement was supposed to be peaceful and nonviolent. Unfortunately, it led to violence. Later on, Gandhiji called off the movement.

India Gate is located at Rajpath, also called Kingsway, in Delhi. It was built to honor the British Indian soldiers who sacrificed their lives in the First World War between 1914 to 1918 in France, Mesopotamia, Flanders, East Africa, Persia, & Gallipoli.

Wagah Border is an International boundary (border) between Indo-Pak. It is famous for Wagah-Attari Border Ceremony. Both Indian & Pakistani armies celebrate this ceremony every day. It is a symbol of rivalry & brotherhood between the two countries.

Champaran is a region, now district, in Bihar. It is famous for the Satyagraha Movement which was started by Mahatma Gandhi in 1906.
Satyagraha means "HOLDING ONTO TRUTH."

Andaman & Nicobar, known for its charming beauty, is a union territory of India. The Cellular Jail, also called Kala Pani, is located in the Andaman and Nicobar Islands.
The Place where British Government used to imprison Indian Freedom Fighters.