In this article, we will be learning about present indefinite tense and its structure. It's the ultimate guide for those who have a phobia of tenses . So let's begin. 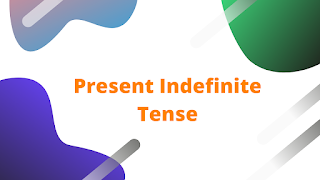 Three Fundamentals of Tenses
FUNDAMENTAL NO 1:

THE VERB AND ITS CONJUGATION:

A verb is a word that denotes:

Note: The verb is the most important word in a language, without it, no sentence can be made.

CONJUGATION: Using a verb in its different styles/forms with regard to time.

A verb has 4 principal styles/forms. The four principal forms are:

From the conjugation point of view, all the verbs have been divided into two groups viz;

1. Regular/Easy/Weak Verbs: Those verbs whose past (V2) & Past Participle (V3) forms are obtained by adding "d/ed" to the present form.

2. Irregular/Hard/Strong Verbs: Those verbs whose Past V2 and V3 (Past Participle) forms are obtained at random ( without observing rules)

Such a verb is called an auxiliary or a helping verb.

Following are the main Auxiliary Verbs Used in English:-

Of the above, the first four groups are directly used with the tenses. They are therefore called the primary auxiliaries/general auxiliaries.

This time yesterday, I was at the bus stop.

Here "was'' is showing the existence.

I was waiting for the bus.

Here was is an auxiliary verb and waiting a principal verb.

I had a problem, I had asked the teacher for help.

Here Had-1 is the Principal Verb, showing possession.

Had-2 is Auxiliary Verb.

Asked is the principal verb.

Every action has got a fore behind it. It is that force which performs the actions directly or indirectly. The noun or Pronoun that reflects the action is called the subject or the person. All the nouns and pronouns in English play the role of subjects.

The following chart gives us the clarification of SUBJECTS in English.

There are 3 main tenses, viz;

On a smaller time scale, each of the three tenses has four Sub-Ordinate Kinds, viz;

a. The Present Indefinite Tense:

Applications: This Tense is used to denote Actions which are true in general, such actions include:-

i) Our Daily Habits, Customs, And Traditions:-

viii) Along with some fixed Structures:

Rule 2: Don't use any auxiliary verb with positive sentences. However, add "s/es" to the principal verb if the subject is 3rd Person + Singular.

New comments are not allowed.