Hello there, In this article, we have listed the most important current affairs of July. So, read and note all the questions.
Let us begin; 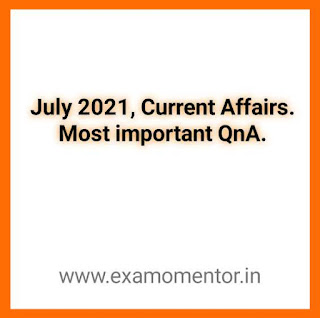 Which country built the world's second-largest Hydroelectric Dam?
Ans: China.
Who became the youngest cricketer to debut all forms of cricket?
Ans: Shefali Verma.
Where was Asia's  Longest High-Speed Track inaugurated by Prakash Javadekar?
Ans: Indore.
Who has been appointed as a new Director-General of Police of U.P?
Ans: Mukul Goyal.
Which Company recently made India's indigenous defense drone "Indrajaal''?
Ans: Grene Robotics.
Who became the youngest Chess Grand Master in the world?
Ans: Abhimanyu Mishra.
Who is the first Chess Grand Master of India?
Ans: Vishwanath Anand.
Which app has been launched by Flipkart to train 25 million online entrepreneurs?
Ans: Shopsy.
Which country was recently declared Malaria free by W.H.O?
Ans: China.
Who has written Anomalies in Law and Justice?
Ans: R.V Ravindran.
Which country has recently banned the death penalty at the federal level?
Ans: The United States of America.
In which city of Rajasthan will the country's second-largest cricket stadium be built?
Ans: Jaipur.
Who is the third woman of Indian origin to travel space?
Ans: Sirisha Bandla.
Which country's airline has been awarded the World's Airline of the Year Award?
Ans: Korean Airlines.
Jim Whitehurst has resigned as the chairman of which electronic company?
Ans: IBM.
Department of Public Enterprises has been brought under which ministry?
Ans: Finance Ministry.
Where is the National Dolphin Research Center being established?
Ans: Patna.
In which city has the world's deepest Dive Pool been constructed?
Ans: Dubai.
#