The Past Tense Structure, Uses, Examples

In this article we will learn about the Past Tense. Its structure, uses and examples. So, read till the end. 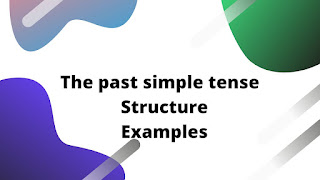 The Past Simple Tense

Applications of Past Simple Tense

The Past Tense is used to denote;

A. An action that took place in the past (complete action of the past).

1. While using past simple, we denote a finished/complete action of the past. It has got nothing to do with now.

2. While using the past simple, there is often a mention of the past viz; yesterday, last year, last month, 2012...

B. To denote historical facts, inventions, and discoveries.

C. To denote a series of past events/actions;

Examples of Past Simple Tense

Past Continuous Structure, Uses, and Examples

Applications of Past Continuous Tense

The Past Continuous Tense is used to denote;

A. An action that was going on (happening) at a particular time in the past.

We also use the past continuous together with the past simple to that an action happened while another action was going on.

Structure of Past Continuous Tense:

Rule 2: Use auxiliary "were/weren't " before all the subjects except First-person singular (I) and 3rd Person Singular (He/she/it)

Past Perfect Structure, Uses, and Examples

Application of Past Perfect Tense:

The past perfect tense is used to denote;

A. Thise actions which were completed before another actions took place.

Examples of Past Perfect Tense.

The past perfect tense is not often used independently. It is very much used to compare two actions of the past. While using this tense we decide what happened first?

Tom looked happy because he had passed the exam.

We often use ''when, already, before, after" while using the past perfect tense.

B. We use the past perfect tense in the conditional clauses to denote something. That was possible in the past but now turned impossible.

The Past Perfect Structure:

Rule 2: Use auxiliary "had/hadn't" before the verb PV3.

The Past Perfect Tense Examples:

Applications of Past Perfect Tense:

The past perfect continuous tense is used to denote;

A. An action that had been going on over a period of time before another action took place in the past.

The Past Perfect Continuous Tense Examples:

The past perfect continuous structure:

Rule 2: Use auxiliary "had (not) been'' beforethe verb (PV4) with all the subjects.

Thank You For Reading.