On 2nd October 1869, Gandhiji was born at Porbandar in Gujrat.  His full name is Mohandas Karamchand Gandhi. He was from a middle-class family, Kathiawar. 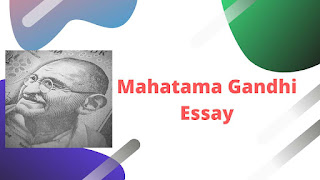 Gandhi has written in his famous book ''India of my dreams'' that I aspire for a strong and free India.'' He was also imprisoned many time by the Britishers.
Gandhiji was against the Varna system of India. He wanted that there should be neither upper class nor middle class in the society. He was against discrimination.
Gandhiji encouraged cottage industries. He was of the view that new India should be self-reliant and independent, everyone should get a proper education. And everyone should enjoy equal rights.
Gandhiji never wore fashionable clothes. He used to wear simple clothes. He was a vegetarian. He fought against the British government non-violently. He was against violence. This non-violent approach of fighting against the oppression has influenced many people around the world. Many countries have recognised him as their inspiration.
Gandhiji was the first nationalist leader of India who identified his life and manners with the life of common people.
He wore clothes like them, lived his life like them and even spoke simple Hindustani.
Besides, he used to spent his free time each day spinning Khadi. Gandhi not only looked like a common man but could understand their problems and relate to their lives.
Gandhiji took up issues of common people & the poors, be it Kheda Peasantry or Champaran peasants & did not take rest till the Justice was delivered to the poor peasants.

Gandhiji was also a great writer who has written many great works to inspire and guide people all across the world.

"Hate the sin, love the sinner."

Gandhiji was shot dead by a Hindu nationalist, Nathuram Godse on 30th January 1948. Gandhi's birthday, 2 October, is observed as Gandhi Jayanti in India, a national holiday, as the International Day of Non-violence worldwide His contribution towards the freedom struggle of India & eradication of inequality and the class system will be remembered forever.
Thank You For Reading ''Essay on Mahatama Gandhi''
Thank You Again for visiting our site : ''Examo Mentor''