In this article, we will be reading a detailed essay on 75 years of Independence of India in detail. It will help in your essay and paragraph writing. You can also use it for a speech. 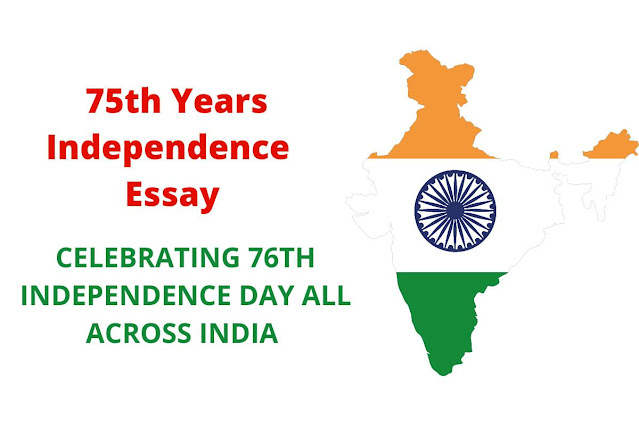 Let's Celebrate our 75th anniversary of Independence & be a part of this beautiful journey to make our India more beautiful.

75 Years of Independence of  India Essay

Independence Day is the most important day in our country. We celebrate it with full joy and happiness. It's the day when we got freedom from Britishers. They ruled India for almost 200 years. They suppressed Indian people incessantly. They also imposed heavy taxes on the Indians.
Thanks to our great leaders like Mahatama Gandhi, Jawaharlal Nehru, Subhash Chandra Bose & other leaders for fighting against injustice day and night. They led many movements against British rule. Though many leaders were jailed for years, they didn't give up on their demands. They wanted Britishers to leave India. And let Indians live freely. With the incessant efforts of our leaders, India got freedom in 1947.
Since then, we celebrate Independence Day to honor and pay tribute to those leaders who sacrificed their time and lives for present India.
After Independence, India progressed in every sector. Our health and education system has been improving at a very significant rate since then. Also, we have become the world's largest democracy.
Furthermore, many initiatives and schemes were launched to make our country more prosperous. For example, Make in India,  Digital India, Self Reliance, and Green India Clean India. These schemes helped India to make progress in different ways. We have become less dependent on other countries. With time, we will become completely self-reliant.
The scheme "Make in India" is encouraging local manufacturing companies to scale up their production. It will help our country to get rid of the unemployment issue.
Our education system has also seen a positive and dramatic shift. It has improved a lot. Recently, the government of India launched a New Education Policy. It will help us to produce good doctors, engineers, and most importantly responsible and rational citizens from our educational institutions.
Though India has made tremendous progress since the Independent, some issues need to be addressed. For example, women's safety and empowerment. The government should take immediate steps to protect our women folks. They should enjoy equal rights as men do. In addition, the Inflation rate is a very concerning matter. We should take major steps to bring down the inflation rate. No one should sleep empty stomach in India. Corruption is also a major concern. It should not be tolerated at all. All those who are found involved in these illicit activities must be dealt with seriously. So that no one dares to ask for a bribe. These issues must be eliminated once and for all.
Those who try to disturb public order should also be punished severely. We should try our level best to make India the best country in the world.
Independence Day will be celebrated on 14 August all over the country. As responsible citizens, we should take part in the festival.
We should also make our participation mandatory in taking part in the n HAR GHAT TIRANGA CAMPAIGN. It will unite every individual regardless of religion, region, or caste.
Happy Independent Day to all of you!
Thank you for reading, 75 Years of Indian Independence Day Essay