THE SHROUD BY MUNSHI PREMCHAND ANANLYSIS AND SUMMARY

Do downtrodden people have the same concerns as the haves in society? How does poverty affect the common man? How tradition is given more importance than human lives in this wretched society? in this post, we are going to critically analyze the shroud by MUNSHI PREMCHAND 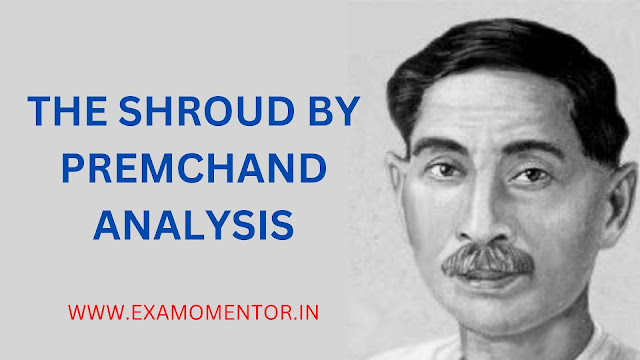 Premchand, the modern literary author, tries to convey to his readers how this money-driven society exploits the lower strata people. The author also points out the importance of conventions and traditions over human lives. He introduces us to the conditions of Dalits especially Chamaras through Madhav, Ghisu, & Bhudhiya.

Ghisu, & Madhav are perceived as lethargic and lazy persons through the lenses of the upper caste. They have no respect in society. They are living their lives for the sake of living. They have no ambitions, no desires except for filling their bellies. Furthermore, they have no feelings in their hearts.

The above nature of the two men shows how poverty can dehumanize people. The way they worry only about their food and not caring about the conditions of Bhudhiya shows us how women were commodified during the colonial era.

The writer, PREMCHAND, also attacks the feudal system. He also tells us how hard it was to go against the norms and customs set by upper castes. The lower castes were made to work for the upper castes. They were not paid enough so they could feed themselves. In addition, zamindars would lend them some money and then trap them in vicious debts & then they were made to work like animals to pay back the same.

The story also tells us that a dead person is more respected than an alive one. When BHUDHIYA was alive, no one did care for the poor lady. It was only that she got some sympathetic praise after she left this cunning world forever. Premchand satirizes the nature of this society with the below lines:

Another thing that I draw from the story is that HUNGER CAN MAKE YOU COMMIT CRIMES. Hunger and hope are powerful forces. If hope is lost, the very essence is lost. If hunger is high, it can make a person commit a crime.

CAPITALISM is one of the major themes of the Shroud. The narrator depicts that the lethargic attitude of the father and son is no surprise as they live in a society where the conditions of working people are no better than theirs.

The title “SHROUD” is also very significant as it depicts the importance of traditional chains and customs. It also depicts how women were exploited till their graves. They were not spared even after death.

To sum up, Premchand has very aptly depicted and raised the issues of gender inequality, class division, caste system, and feudal system prevalent during the British colonial era. Prior to Premchand, there were hardly any writers who raised these issues. Though Premchand himself was not from shudra’s caste, he tried his best to raise a much needed voice against the injustice and unite the exploited people together under one umbrella through his writings.