This is an important essay for primary & high school students....
Please, go through it thoroughly...
Without further ado,
Let's begin our today's essay... 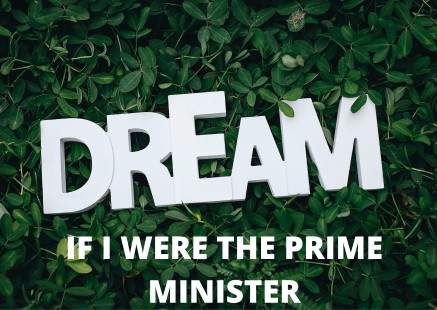 If I Were The Prime Minister of India Essay

I have a dream. The dream is that I want to be the Prime Minister of India. If ever my fate favours me & I become the prime minister of India, I am planning to do the following things in my tenure as the Prime minister of India.
According to Statista, In 2021, Twelve Million Children between the ages of  10 years to 14 years are affected by the poverty in India. If I were the prime minister of India, I would try my best to eliminate this terrible poverty from my country. I would provide jobs to poor people. I would make them skilled by providing free technical education. That would help them get jobs & can live their lives happily.
Another change that needs to be done in our country is in education sector. I would love to see everyone educated. If I become the prime minister of India, I would take immediate steps to make education free for all irrespective of age and gender. It is our fundamental right. I would love to make the education system of our country, child centred.
Next, I would eradicate corruption from my country. If I were the Prime Minister of India, I would terminate those employees who take bribes. I would love to make my country corruption free.
I would charge high taxes on the rich and middle class people & poor people will be exempted from the taxes. There will be no taxes for the poor people. Furthermore, I would eliminate black money from the country. If anyone will be founded in such heinous crimes, I would punish them severely.
Moreover, I would change the position of my country from a developing country to a developed & prosperous nation. I would promote businesses that would help our economy grow fast. For encouraging people to do businesses, financial assistance would be granted.
Another aim of mine is to promote self-reliance. I would make major changes in imports from other countries. I would encourage my people to be self-sufficient & self-reliant. I would promote make in India startups to let my country's economy boom.
If I were the prime minister of my country, I would open more and more government hospitals for the convience of people. Health services would be given significant importance. I would make this health system free for everyone.
If I were the Prime Minister of India, I would make strict laws for heinous crimes such as corruption, molestation, rapes ,women related crimes, etc.
I have so many plans for my country. Due to the lack of time, I am not able to mention them all.

Thanks For Reading;
Essay on If I were the prime minister of India.
Also Read;
If I were a bird Essay.
By: Yawar Gulzar Baba