In this article, we have answered Doctor Faustus as a morality play in a very simple and lucid language. Go through it thoroughly and read it multiple times for long-term retention. 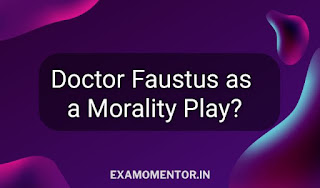 What is a morality play?

A morality play is an allegorical drama, most popular in the 15th and 16th centuries, in which characters personify moral values and ethics.

Doctor Faustus as a morality play?

"The Tragical History of Doctor Faustus" written by Christopher Marlowe, highlights a man, who sells his Soul To The Devil (Satan) for his lust for power and knowledge. The play starts with a hero named Doctor Faustus. He abjures the Trinity, Holy writ and Christ. Faustus makes a bond with satan for the sake of learning and power. He completely surrenders his soul to Satan (Devil). Out of his absurd ambition to gain superhuman powers by mastering necromancy. In this play, good struggles with bad. Thus the drama is a morality play. In this play, we see Doctor Faustus' nature filled with duality. He could not make any choice. Whenever he has to make any decision, he confronts Good and Bad Angel. Bad Angel suggests sin and good angel virtue.

By following the advice of Bad angel, Doctor Faustus, lives a blasphemous life, filled with sins and worldly pleasures. Thereby paving his way to the hellfire. While Doctor Faustus signs a bond where he oaths to sell his soul to the devil (Lucifer), his blood clots, preventing him from signing the Bond. Faustus still is not able to understand ''What is right and what is wrong''

In the last hours of his life, Faustus realizes his mistake that sins can not be ignored and no one can save him from the eternal curse. Demons grab his soul to the burning hell.

Through this play, Doctor Faustus gives us a message that whosoever denies the existence of God is doomed with eternal domination. He tries to convey a message that we should not indulge in devilish and evil acts to gain power, knowledge, etc.

The Good and Bad Angeles are moral characters of the play. The basic beliefs of Christianity are inherent in every single line of the play "Doctor Faustus''.

"Faustus is gone; regard his hellish fall whose friendish fortune may exhort the wise; Only to wonder at unlawful things, Whose deepness doth entice such forward wits. To practice more than heavenly powers permits."

Read ; My experience with online classes